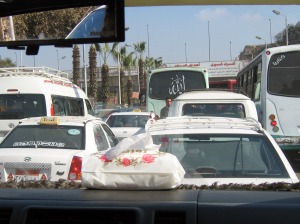 THEY said we only needed two Arabic words – La shukran, meaning No thank you.

But the Egyptian street traders paid no attention, so we tried No in English, repeated a million times. Beseiged by street traders at every tourist spot, we soon learned the ropes.

‘It is a present’ means it’s free but the giver expects a present in return. Preferably money.

‘Maybe later?’ is the question raised when La shukran finally seems to work. But we soon discovered that agreeing to ‘maybe later’ actually constitutes a contract to recommence negotiations on the return trip from wherever you were going.

Personally my negotiation skills are abysmal. It’s a family joke that I end up suggesting and paying more than they asked in the first place. My son, who was travelling with us, reckons that the jungle drums were at work and word was out… try that man there, he’s a soft touch!

Together, this moving mass of humanity turns a seven lane highway into 12 or more lanes. Travellers change lanes with blatant disregard to those alongside, in front, or behind. With a tolerance of millimetres, how the wing mirrors survive is beyond me.

When there is a collision, there is also an argument which draws the attention and involvement of bystanders and fellow travellers. All of which adds to the general congestion. Of course, no one is seriously hurt because none of these modes of transport is travelling fast enough to cause serious injury.

Much more likely, at least for a Westerner, is the chance to die of starvation while waiting for an opportunity to cross the highway. The fact is, there is no such opportunity. Eventually you realise that you do as the locals do and simply step from the kerb, enlist the aid of the merciful Allah, and steadfastly make your way to the central reservation. The traffic, you find, will simply swerve around you. Of course, you need to go through the whole heart-stopping exercise again to get from the central reservation to the other side.

Each time we passed a certain spot, I swear I saw the same very elderly gentleman marooned on that central reservation. It looked as if he were growing older minute by minute.